This ginger mule cocktail, also known as a Moscow mule is an absolute classic. It combines vodka, fresh lime juice, fresh mint and ginger beer for a zesty and fiery drink. I like to add a dash of cayenne for that extra kick!

This pungent vodka-based cocktail was invented in New York in the United States in the 1940s but is still a classic to this day. Although it looks absolutely spectacular, it's incredibly easy to make. You don't even need a cocktail shaker as the drink is built into the mug itself. 3 ingredients and 3 minutes are all it takes for a classic Moscow mule.

If you like simple ginger cocktails, you need to try this lemony cocktail with ginger syrup.

Why are Moscow mules served in copper mugs?

Note on Moscow mules and copper toxicity: You may have heard of the potential toxicity of copper mugs when in contact with acidic food. However, there's no need to worry about drinking a ginger mule out of a copper mug. According to experts, the drink would have to be pure lime juice and sit in copper for hours for toxic amounts of copper to leach into the liquid (source). If you're still worried, get copper mugs with a stainless steel lining.

STEP 1: Fill a copper mug with ice cubes. If you don't have such mugs, a rocks glass or a highball glass works, too.

STEP 2: Pour the vodka and lime juice into the mug. You can use a cocktail jigger or tablespoons to measure the liquids.

STEP 3: Top it off with ginger beer. Optionally add a dash of cayenne pepper. Some like to add a splash of club soda, too.

STEP 4: Smack a sprig of fresh mint. Garnish your mule with the mint sprig, a lime wheel, and a slice of ginger. Candied ging on a cocktail pick also makes a great garnish.

Watch how to make it!

Contrary to popular belief, ginger beer DOES NOT contain alcohol. It's a sweetened, carbonated soft drink. The confusion often comes from the fact that back in the day, ginger beer was made from the fermentation of ginger, water and sugar, with yeast, which led to the production of alcohol.

Although the name can be deceiving, ginger beer is 100% gluten-free. It's made from fermented ginger and free from gluten-containing cereals.

What's the best vodka for a Moscow mule?

The best choice is a mid-range vodka for your mules. I don't recommend a premium vodka as the lime juice and ginger beer won't let you appreciate its nuances. 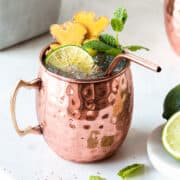 Loved it? Please rate it!

If you tried this recipe or any other recipe from the blog, make sure to let us know how you liked it by leaving a star rating and a comment below! Your feedback really matters! To never miss a recipe, follow me on Instragram, Pinterest and Facebook.

Hi, I'm Elo!
My goal is to make vegan and gluten-free cooking easy and enjoyable. I provide simple recipes to help you meal prep according to your dietary restrictions and hope some of them will make the list of your all-time favorites!