This sparkling apple cider cocktail spiked with Jack Daniels Fire whiskey is the ultimate Thanksgiving or Christmas drink. The warm cinnamon notes bring fresh apple cider to life and turn this cocktail into our favorite boozy fall drink. You can serve it to a crowd or as single-serve cocktails.

On cold winter days, you might also like this homemade mulled wine or this alcoholic hot chocolate with Jack Daniel's Fire.

How to make apple cider cocktail

To make this apple cider whiskey cocktail, you'll need Jack Daniel's Fire (a cinnamon-flavored whiskey) and fresh apple cider. If possible, get your cider from an apple orchard or co-op near you. You can find potential substitutions below.

This cocktail recipe is very simple and uncomplicated. Simply mix the cider and the whiskey, give it a stir and you're done. You can serve it with a few slices of apple and a cinnamon stick if you'd like.

All you need to rim cocktail glasses is lemon juice and a little sugar. Put the lemon juice and the sugar into two different containers or on saucers. Dip the rim of each glass in lemon juice first, then in sugar.

Expert tip: making circular movements will help to coat the rim of the glass evenly.

Serve it in a punch bowl

Making this apple cider whiskey cocktail in a punch bowl is a fun way to serve it at a fall dinner party or on Thanksgiving or Christmas. It looks festive and allows everyone to get a refill anytime without having to ask the host.

If you get half a gallon of apple cider (64 fluid ounces) you can make about 12 cocktails (see recipe below). Feel free to adapt the quantities based on the number of servings you need.

To make it alcohol-free and turn it into a sparkling mocktail, replace the apple cider with sparkling apple juice (or mix apple juice and sparkling water at a 3:1 ratio) and use cinnamon syrup instead of Jack Daniel's Fire.

You can either drink this Jack Daniel's Fire apple cider cocktail cold on the rocks or reheat it until warm and steamy.

Does apple cider need to be refrigerated?

Yes, leftover apple cider needs to be refrigerated. You can store it in the fridge for up to a week.

Is Jack Daniel's Fire a bourbon?

What alcohol can you mix with apple cider?

Apple cider can be spiked with whiskey, bourbon or spiced rum. Our favorite option is cinnamon whiskey such as Jack Daniel's Fire or Fireball. 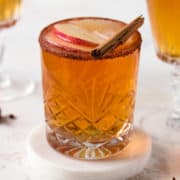 If you tried this recipe or any other recipe from the blog, make sure to let me know how you liked it by rating it and leaving a comment below! Your feedback really matters! Follow me on Instragram, Pinterest and Facebook to never miss a recipe.

Hi, I'm Eloïse, the recipe developer and passionate food photographer behind Cooking With Elo. My goal is to show you that vegan and gluten-free recipes can be quick and easy to make (all while being incredibly delicious)! On the blog, you'll find easy-to-follow vegan recipes to put together your weekly meal plans!