Eggplant masala is made of soft roasted eggplants drunk in a spiced curry sauce. It's super comforting but still light on your stomach! You can make this recipe in 30 minutes, which makes it a great after-work meal. You might also like this easy sweet and sour tofu with rice!

If I had to describe eggplant masala I would say it's a super flavorful roasted eggplant curry. It's basically like a vegan tikka masala, where you replace the chicken with eggplant (so good!). Served over rice, this meal is also entirely gluten-free. I HIGHLY recommend trying it out!

What we love most about this recipe is that it's ready in only 30 minutes and is the perfect meal to prepare after a busy day at work.

Note about the spices
Tikka masala is usually composed of a blend of spices including coriander seeds, cumin seeds, fennel seeds, turmeric, cloves, cinnamon, cardamom, and ginger. Note that these vary based on culinary tradition, family recipes, and geographical location.

For this recipe, we like to use garam masala and a mix of cumin and fennel seeds. We chose to add garam masala because it is a spice blend that can easily be found in grocery stores and contains most of the spices named above.

Step by step with pictures

Sauté the eggplants. Add the eggplant and a pinch of salt to the pan or wok and stir. Cover with a lid and let steam for about 5 minutes.

Cook the rice. Bring water to a boil and cook the rice according to the instructions on the package.

Quick tip: chose "fast-cooking" rice that has a boiling time of 10 to 15 minutes for quick weeknight dinners.

Quick tip: If you don't have the required spices at home already, you can use 2-3 teaspoons of red curry paste instead. The flavors will be different but the taste will be just as incredible (we tested it)! Add the curry paste with the canned tomatoes and sugar and skip the step that requires roasting the spices.

If you fancy a meal that is higher in protein, feel free to add cooked lentils or chickpeas (pre-cooked or canned) to the eggplant curry.

You can make this eggplant masala recipe ahead of time and store it in the fridge for up to 3 days. Make sure to use air-tight containers adapted to meal prepping. You can store the rice and the eggplant curry in the same container. 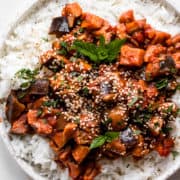 No ratings yet
Eggplant masala is a super flavorful roasted eggplant curry. One could say that it's a vegan tikka masala, where you replace the chicken with eggplant. Served over rice, this meal is entirely gluten-free.
Print Pin
Prep Time: 10 minutes
Cook Time: 20 minutes
Total Time: 30 minutes
Servings: 2
Author: Eloïse Jennes

Leave a rating and comment below! Thank you!Don't forget to mention @cookingwithelo on social media

If you tried this recipe, make sure to let me know how you liked it by rating it and leaving a comment below! Your feedback really matters! Follow me on Instragram, Pinterest and Facebook to never miss a recipe.

Hi, I'm Eloïse, the recipe developer and passionate food photographer behind Cooking With Elo. My goal is to show you that vegan and gluten-free recipes can be quick and easy to make (all while being incredibly delicious)! On the blog, you'll find easy-to-follow vegan recipes to put together your weekly meal plans!